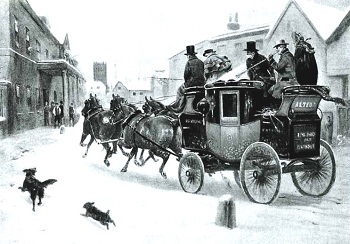 The ancient parish was crossed by a network of roads. One, the Buckingham road, was a Roman road, running from Alchester (just north of Wendlebury) to join the Watling Street at Towcester. The Launton, Caversfield and Bucknell roads were ordered to be made 40 feet wide by the Market End inclosure award of 1758. The state of the roads about that time may be judged from Sir Harbottle Grimston's observation that the road between Bicester and Buckingham was 'very bad, almost impassable for a carriage'. The turnpike acts, however, transformed this situation. Buckingham Road was turnpiked in 1768–9; the Banbury road, a part of the coach road from London to Birmingham, was turnpiked in 1790–1 along with the Bicester–Aynho section of this road. The Bicester-Aylesbury section of it had already been turnpiked in 1770. When this road entered the parish in the south it followed the line of Akeman Street. It originally entered the town centre via Water Lane/Chapel Street. A toll-gate was situated not from far from its junction with Priory Road. The road was then re-routed along the line of the current London road, prior to the building of the Oxford / Bletchley railway line in 1850 and the toll-gate moved further out of town on the Aylesbury/London road. See 1833 map. The turnpike from Aylesbury to Aynho via Bicester (i.e. the London road) was freed from toll by acts of 1875 and 1876. The toll-house on the London road was still standing in 1956.

A new arterial road to by-pass the centre of Bicester was built in 1939; it followed the line of the old Roman road through King's End to Crockwell; it was named Queen's Avenue and planted with trees in 1953 in commemoration of the coronation of Queen Elizabeth II. It was at this time that the road to Oxford was straightened. Originally it wound its way along the road that now runs past the Wyvale Garden Centre, through the centre of Wendlebury and on towards Kidlington. Traces of the old road can still be found behind the petrol stations on the A34 near Weston on the Green.