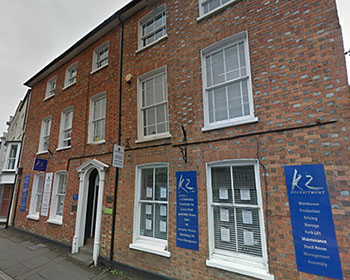 This eye-catching building on London Road, opposite the King’s Arms, probably dates to the first half of the 19th century. Its brickwork is striking: handmade red stretchers laid in Flemish bond with blue headers. This pattern of laying bricks was hugely popular in the Georgian period and is called chequer work. The front façade has a number of other Georgian features: its fenestration (window pattern) is exactly symmetrical around the central doorway. The latter has a typically Georgian panelled door with fan overlight. It is surrounded by a reproduction wooden pilastered door case supporting a triangular pedimented head.

Interestingly, close inspection of the brickwork and the windows show that the three bays to the left predate the two to the right – though clearly both sections were built to the same plan. The side elevation to the right, which was never intended to be seen, incorporates some of the bricks that were intended as headers but failed to fire properly and, as a consequence, only have mottled colour.

5 London Road was the home of Dr Cecil Morgan Kendrick (1856-1925) at the turn of the 20th century. He was a prominent local doctor who, amongst other things, was the medical officer to the local schools and owner of one of the first motor cars in Bicester. His daughter, Esther, ran a 56 bed Red Cross hospital next door at Hometree House (then Bicester Hall) during the First World War.