The Bicester area, prior to the Roman Conquest of A.D. 42, formed a frontier zone between the Iron Age tribes who were resident in the region. The River Cherwell and Aves Ditch formed significant boundary features. The Dobunni to the west of the Cherwell, the Catuvallauni to the east and the Atrebates to the south were the dominant tribal groupings of the time. There are no large Roman towns in the county as the tribal capitals at Cirencester, St Albans and Silchester developed into the major centres. Present political boundaries did not apply at that time.

The Romans had a number of reasons for invading Britannia. The Emperor Claudius (A.D. 41 – 52) needed a successful military campaign to enhance his position and creditability at home. The mineral wealth of the British Isles was a further attraction with deposits of gold, copper, lead, silver and iron ore to be plundered. The rich agricultural potential of the countryside, a supply of slaves, hunting dogs and potential taxation revenue also had a part to play. 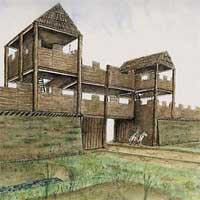 The Invasion of A.D. 43 landed at Richborough, in Kent, and advanced westward through southern England and into the Midlands. A frontier zone, on a line between Exeter and Lincoln, was established by 44 A.D. The site of Alchester was in a strategic position and centrally placed in the country.

A Marching Camp was initially established with a defensive ditch around it adjacent to the present Langford Lane. A Parade Ground was later constructed on this site. The wooden Vexillation Fort had been established by late A.D. 43 or early A.D. 44. This date is confirmed by analysis of the fort's western gatepost which provides tree ring pattern confirmation. The fort had an Annex added to the western margin and housed five thousand troops at its maximum. This included cavalry detachments. A series of defensive ditches were constructed around the Fort and Annex with a wide array of defensive features such as sharpened stakes. 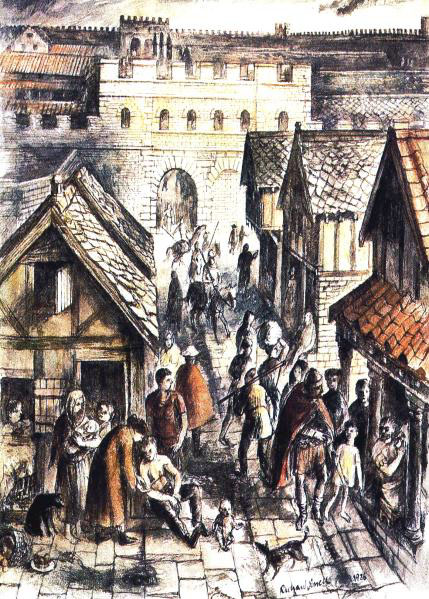 The site of the fort has been well known for many centuries. Stone was robbed from the remains for local construction projects. Tiles and bricks were used to repair Merton Church. Excavations within the Annex have located the site of granary buildings. The fort was abandoned in the mid A.D. 60s as the occupied areas moved north and westward and as the strategic position of the fort became less important. A civilian settlement grew up outside the fort to cater for the needs of the troops. The settlement was able to expand into the fort once the army had departed. 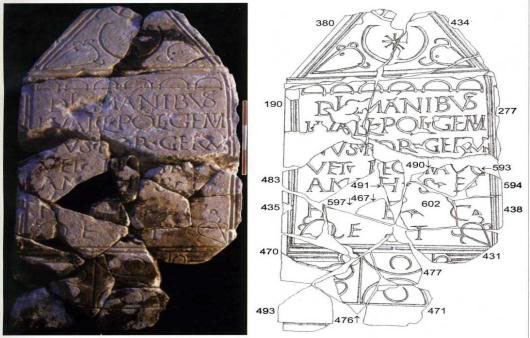 A significant tombstone was excavated, buried within the foundations of the later civilian town walls near the western gateway. This commemorated the life of a retired legionary and confirmed the presence of the II Augustan Legion at the base. They were commanded by the future Emperor Vespasian.

The civilian settlement developed a regular grid pattern which is unusual for a small town and grew as an administrative and market focus in the area. Temples and several stone buildings have been identified within the town. The stone town wall was built in the 2nd Century to meet some unexplained threat at that time. The extramural settlement outside the walls was large and contained small farm and industrial units that supplied the settlement with goods. Cemeteries have also been located outside the town boundaries.

The countryside surrounding the town was dominated by large villa estates with small farms supplying the main villa complex. Agricultural production increased with the introduction of improved technology, crops and animal husbandry techniques. An increasing population required previous marginal land areas to be brought into cultivation. There was a constant difficulty in keeping drainage ditches from silting. Cereal production proved successful during drier climatic conditions although as wetter periods evolved pasture became the major crop with stock rearing in meadowland locations.

Roman sites in Bicester confirm the rural nature of the location. There is limited evidence for Roman villa complexes at Crockwell and Southwold. The Southwold site may have been high status but archaeological evidence was destroyed by developers before the site could be fully examined. Low status farmsteads have been located adjoining Bicester Village, near to the Eastern Ring Road and in the area of the Greenwood Housing Estate. Part of a rare wooden writing tablet was located at the Eastern Ring Road site. 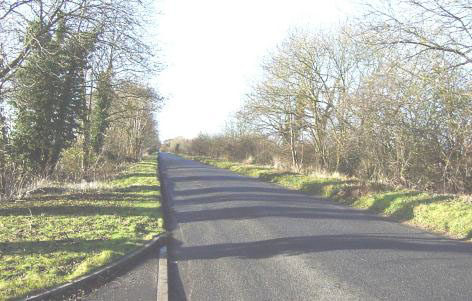 A lasting legacy of the period is the present road system, part of which still follows the ancient Roman routes today. Akeman Street can be traced from Cirencester to St Albans and a network of alternative routes lead to other significant locations. The road across Otmoor can be traced as can the site of the bridge that crossed the River Ray near Fencott. The Temple at Woodeaton was an important religious centre and probably built on the site of a Celtic complex. Many votive offerings have been recovered from the site. A significant pottery industry developed to the south of the area.