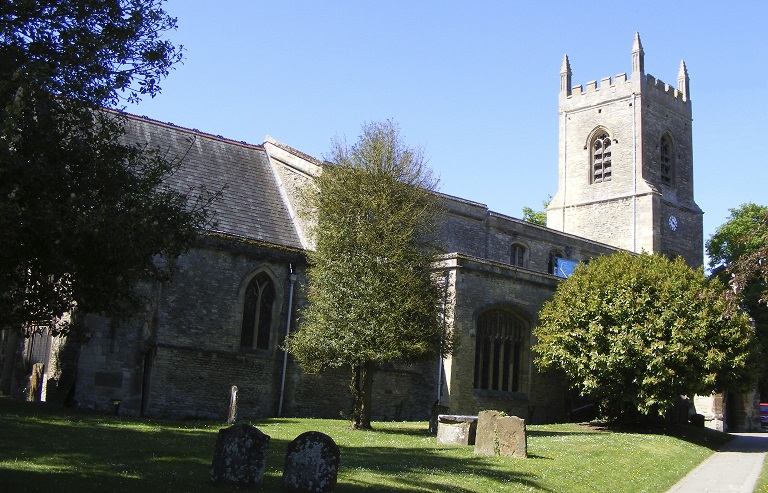 St Edburg’s Church sits at the heart of Bicester’s medieval centre in Church Street.  The building is the product of many centuries of architectural and social development.  It is likely that a simple Saxon church stood on its site in around 850AD.  There is a triangular arched entrance set in the north wall of the current nave which, some historians believe, was the original entrance.

The church was dramatically altered and extended by the Normans in the early 12th century.  Gilbert Basset, one of the earliest manorial lords of Market End manor, oversaw the addition of transepts, an extended chancel and, possibly, a central tower – so the church probably took on an archetypal cruciform shape.  The central tower, if it was ever built, no longer exists but the rounded Romanesque arches that could have supported it still exist in front of the chancel and at the crossing point between the transepts. 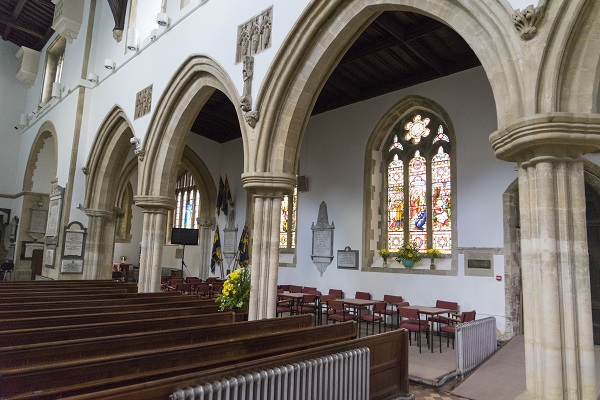 The south aisle was added in around 1250, with an arcade punched through the original nave wall with characteristic Early English pointed arches, clustered column supports and deeply undercut capitals.  Stiff leaf carving on the south aisle interior capitals and on the exterior south door also help us date this development. 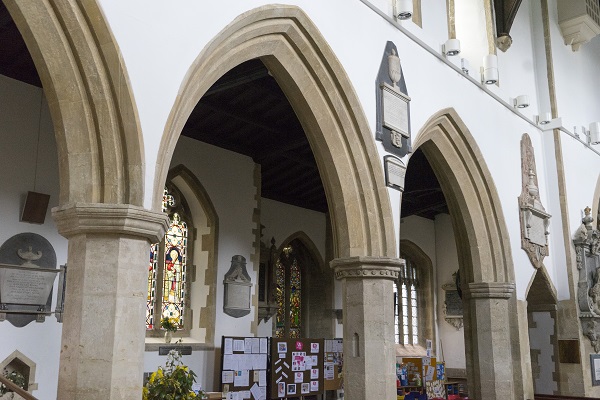 In the fourteenth century (c 1340) a north aisle was added with its more robust octagonal columns along with a north chapel.   This chapel, now the vestry, once had an upper chamber, perhaps to lodge the sexton, but which was later used from the late 17th century as a school room for a grammar school founded by the Vicar. The doorway into the school can still be seen on the exterior.  In 1390, a clerestory was built on top of the original nave walls to shed more light into the central nave.

Around 1420, the architectural profile of the church changed again and the west tower was built, 22.5 m high (c. 75feet).  Its design is very characteristic of the 15th century Perpendicular gothic period, with its two-storey high internal opening and its flat-headed external doorway.  The tower itself houses the bell chamber and ringing platform.   Around the same time, the north porch was added, its tiny upper storey once housing the church records and chests. 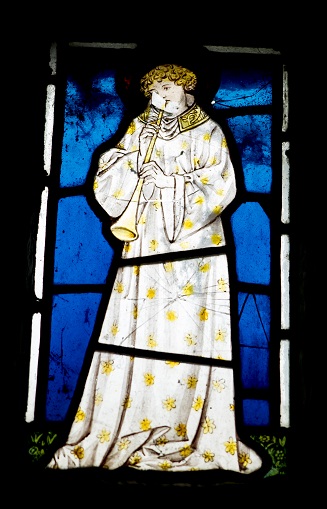 Unfortunately virtually all of the medieval stained glass was lost to a lightning storm of 1765, the only survivor is thought to be a tiny fragment portraying an angel which is now positioned above the south entrance to the chancel.  There are some very fine Victorian windows, however, including a spectacular example situated in the south transept designed by Edward Burne-Jones – a prominent member of the pre-Raphaelite movement.  It depicts the angels of hope, faith and charity, trampling on the vices of despair, unbelief and hate.

During a major restoration of the church in the 1860s, the old Georgian high backed pews and galleries were removed.  A few years later, the vestry was “beautified” with a wooden screen, still in situ, with painted decorations on a gilt ground and signed : ‘H.L. Busby 1882’.

Dotted around the church are many memorials to local dignitaries including the Page-Turners of Ambrosden who were major landowners and local benefactors, and the Coker family who were lords of the manor of Kings End from 1584 until the 1970s, and lived in Bicester House. 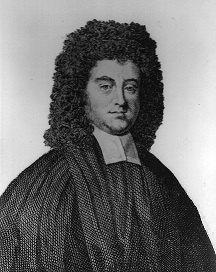 Among those memorials honouring the clergy who served at St Edburg’s is one for Samuel Blackwell, vicar between 1670-91, who was Dean of Bicester Deanery and founded the 17th grammar school.  His curate was White Kennett, the future Bishop of Peterborough, who published many learned works including two volumes of history on the town of Bicester and its priory.