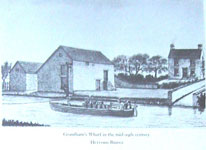 Oxford Canal is amongst the earliest of cuts in the Canal Age. It was constructed and opened in sections between 1774 and 1790 with a wharf at Lower Heyford, six miles from Bicester. This was particularly valuable as it brought Bicester into direct connection with the collieries in the West Midlands and ensured a supply of cheap coal. Horse drawn carriers then transported the coal to Bicester.