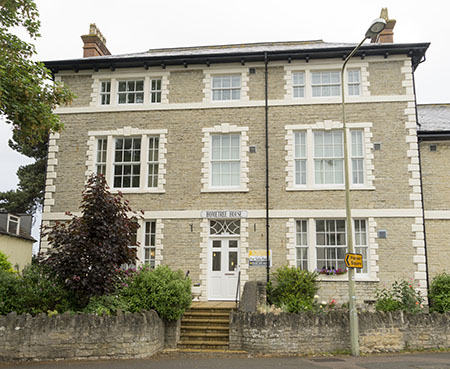 It is probable that Hometree House, originally called Bicester Hall, was built in the first half of the 19th Century and there is some evidence that an apothecary, Thomas Davis, was the first owner.

Hometree House has the tell-tale symmetry of Georgian and Regency buildings, with two large bays flanking a central entrance (we do not know whether the annex at the side of the house, built in a matching design, is contemporary with the main building). The front façade has extraordinarily pronounced decorative features that dominate its aesthetic impact. It has extensive rusticated quoins (cornerstones the joins of which have been deeply recessed to emphasise the stonework) and rusticated window jams. The first floor windows have showpiece key stones, hinting at a piano nobile and all the windows are large, three light sashes with stone mullions. The large overlight above the door has the kind of highly decorative patterned ribs or tracery that Regency houses indulged in. Twentieth century photographs show that this doorway also once had a porch and a covered walkway leading to the road in front. 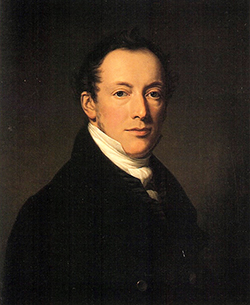 This building was clearly designed for impact, although, for the architectural purist, its decoration is rather unrefined and over the top. Whoever financed it or oversaw its design clearly had ambitions beyond the building’s size.

The huge popularity of the Bicester Hunt and Bicester horseracing throughout the 19th century attracted an affluent middle class into the town – particularly from London and by 1874, Bicester Hall is the hands of Baron Henry Schroeder, a London merchant banker of German descent, and whose bank, Schroeders,  still exists. He used Bicester Hall as a country retreat and hunting box. 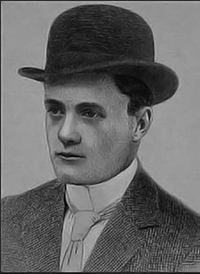 Twenty years later the 4th Earl of Cottenham, one Kenelm Charles Pepys (a descendent of the famous diarist Samuel Pepys) is now the building’s owner and he is also using the house as a hunting box. The Earl was Master of the Bicester Hunt between 1895 and 1899, and it was he who added the large brick built stable block to the rear in 1896 and a covered entrance at the front to receive the carriages of visitors. The latter was removed after the Second World War when London Road was widened. 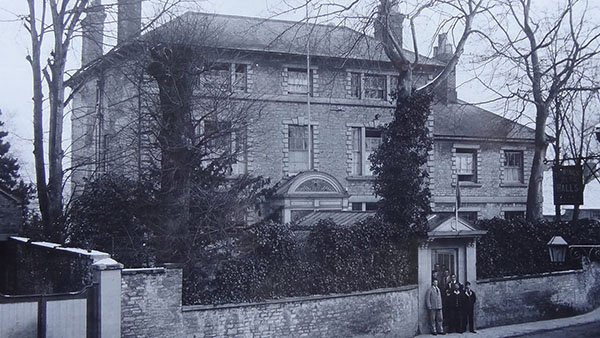 Early in the twentieth century, Bicester Hall began to undertake more civic roles. With the advent of the 1914-1918 war, the whole building was turned into a 56 bed convalescent hospital for lower ranking soldiers from all regiments, and administered by the Bicester Branch of the Red Cross with volunteer nurses. It was a hugely successful operation and had its own magazine called, whimsically one hopes, Whizz Bang. The first commandant of the hospital was Miss Esther Hendrick, daughter of a well-known local doctor, Doctor Hendrick, who lived next door at 3 London Road.

Immediately after the war, in 1919, the building was purchased by Oxfordshire County Council to house the County School which opened in September 1924 and which achieved grammar school status in 1946. Fees were £10-12 guineas a year and the school opened with 43 pupils – 28 boys and 14 girls, with 10 free scholarships. 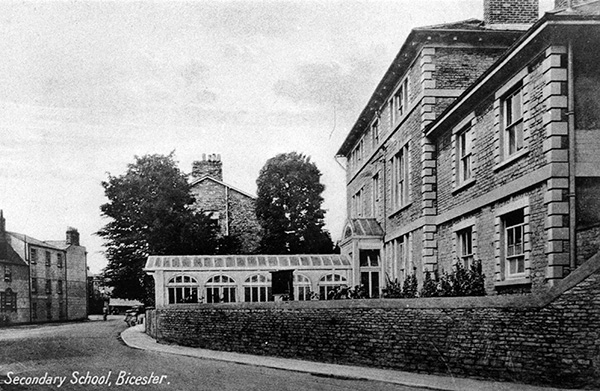 The first headmaster was John Howson. The number of pupils had risen to 113 by 1928, and to 277 by 1956. By then the headmaster had a staff of 13 full-time and 2 part-time teachers, and a sixth form with 17 pupils. There were 9 classrooms, a gymnasium, 2 laboratories, a woodwork-room, dining-room, and kitchen. The school remained in the building for nearly forty years until it moved to a new secondary school site off Queens Avenue in 1963.

After the school moved out, Bicester Hall was occupied by the then Department of Health and Social Security.

The house was finally sold by the council in the 1980s and developed by McCarthy & Stone into retirement flats – and at this point renamed Hometree House. The interior was converted into retirement flats and a large brick built block of additional accommodation was built adjoining the rear of the building. As a result, there is almost nothing to see of the building’s original features internally, though the original main hallway is still the main entrance to the complex.

The council retained some of the Hall’s grounds to the rear which is now occupied by the Bicester Resource Centre, and The Earl of Cottenham’s stables now house the Courtyard Centre for youth arts and activities.