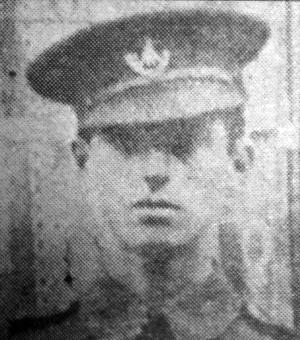 "The announcement of the death of Pte. Howard Clifton, whom we last week reported to be slightly wounded, came as a great shock to his relatives and friends, who had expected that the wounds which he had sustained would keep him from the firing line for a short time at least. It appears, from the letters which have been received from his officer and chaplain, that upon being wounded he went to the dressing station and had his wound dressed and then returned to the firing line, where he was soon afterwards killed. The fact that he had been wounded was known to practically no one until the regiment’s return to billets for a short rest.
His officer writes: “It is my sad duty to tell you that your son “Punch” was killed in action yesterday (24th June). The regiment had a very difficult task of capturing a German trench which was holding up the advance of the whole line, and did the job very successfully, but not without some rather heavy casualties, among whom were Pte. H. Clifton, who was killed accompanying his officer, 2nd Lieut. Hutchins (who was dangerously wounded at the same time) in the attack. We shall all miss him terribly, as he was a general favourite throughout the Company, and an excellent Officer’s servant, as well as being a jolly good soldier. His first officer, 2nd Lieut. Rawlinson, was unfortunately killed on patrol a fortnight ago. Your son was slightly wounded a few days previously, but bravely said nothing about his wound until the battalion came back to billets afterwards. He was always cheerful, whatever the circumstances, and the mess will not be the same without his happy face.”
His chaplain afterwards wrote “By now, you will have heard that your son, H. Clifton, was killed on July 22nd. I am writing in the hope that you may find some comfort in the thought that he did not live to suffer as some poor fellows have. From what I can gather he could not have suffered. The Colonel has asked me to express to you his deepest sympathy.” This was signed by the Rev. Kennett. – It will be noticed that the dates given by the chaplain and officer do not correspond. The former states that Pte. Clifton met his fate upon the 22nd and the latter upon the 24th, but as the latter date is also mentioned by Pte. Ernest Clifton it suggests that more reliance may be placed on that date. He was 18 years of age, and went to the Front in February, having joined the regiment twelve months previously." Bicester Herald 04/08/1916

"Another letter has been received from a comrade of Pte. Howard Clifton, whom we reported last week to be killed, by his parents, Mr and Mrs Clifton, of North-street, Bicester, to the effect that: – “I could not let this sad trouble which has befallen you pass without offering to you my sincere sympathy, as your dear son had been my friend ever since he came out. He was a good soldier and a good comrade, always cheerful and bright, and ever ready to lend a helping hand to any of his comrades. I can assure you that we, in the officer’s mess, miss him very much, and I have no doubt that you have now had a letter from our captain, who, I know, considered him a good soldier, and a good servant. He had just taken over a new officer, who was wounded at the same time, his old officer having been killed. You have one consolation, that he died as he had lived – a soldier and a true comrade.” The writer of this letter was a stranger to the parents." Bicester Herald 11/08/1916