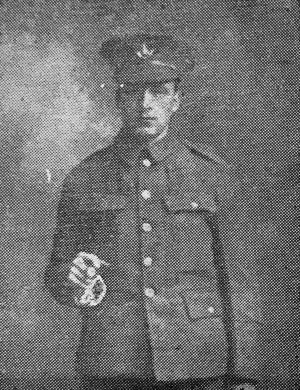 "An official communication has been received from the Record Office, by Mrs C. Buswell, of Bardwell-terrace, Bicester, to the effect that her son, Lance-Corpl. Jesse Bottrell, of the Oxon and Bucks Light Infantry, died on August 15th, in hospital at Etretat, France, from wounds received in action.
One of his nurses wrote: “It is with much regret that I tell you that Lance-Corpl. Jesse Bottrell died early this morning. A second operation became necessary owing to his wounds becoming gaseous, but it was of no avail to relieve his condition. He will be buried in the military cemetery here, and will have full military honours accorded him.”
The deceased soldier had written home to the effect that his regiment was going into the trenches, and upon its return he hoped to have some leave. He joined his regiment a month after the outbreak of war, and was twenty-six years of age." Bicester Herald 18/08/1916