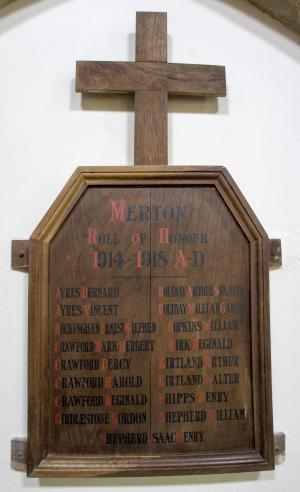 "Captain Reginald Gresham Thomson, M.C., King’s Shropshire Light Infantry, who died on September 18th, of wounds received the same day, aged 22, was the youngest surviving son of the late G. O. L. Thomson, Vicar of Merton, Bicester.
He was educated at St. Edmund’s School, Canterbury, and passed into Sandhurst in January, 1915, and obtained a commission in the K.S.L.I. in the summer of that year. He proceeded to Gallipoli in November with a draft of the North Staffordshire Regiment, to which regiment he was temporarily attached, and took part in the evacuations of Sulva Bay and Cape Helles, gaining the Military Cross within three weeks of landing on the Peninsula.
Subsequently he went to Mesopotamia, and in April, 1916, was dangerously wounded in the lung during one of the early attempts to relieve Kut. Having been passed for light duty in the following August he returned to his regimental headquarters where he was appointed bombing officer and instructor, first to the battalion and later to the brigade.
In August, 1917, he went to the front, and on March 21st last was again wounded. He was passed once more for general service, returned to the front last August and was given his company, and fell “whilst gallantly leading his company in the attack.”
His commanding officer further writes: – “He is a great loss to us, for he was quite one of my best Company Commanders, so brave and full of keenness, and his men were devoted to him... We mourn with you the loss of a brave and true comrade.”" Bicester Advertiser 04/10/1918