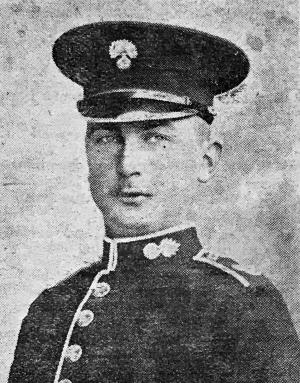 "According to a letter received from Private E. Butler, on Sunday, Private W.C. Simons, Grenadier Guards, of St. John’s-street, Bicester, has been killed at the front. Official information, however, at the time of writing is lacking. Private Simons was a native of Launton, and joined the army two years ago with two other Bicester men, who have since been killed in the present war. He was 22 years old, and went to the Front at the end of July." Bicester Herald 22/10/1915

"The parents of Private W.C. Simons, of the 3rd Batt. Grenadier Guards, have been officially notified that their son was killed in action on September 27th. This confirms the news conveyed to the parents in a letter to a friend received on Saturday week. Only the day before his death Pte. Simons dispatched a post-card to his home in St. John’s Street, Bicester, stating that he was well." Bicester Advertiser 29/10/1915