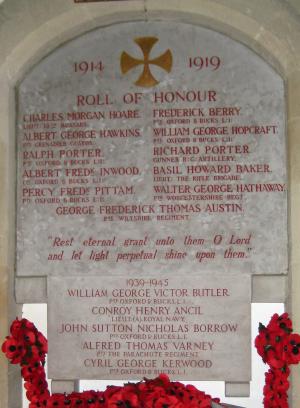 "News has been received at Chesterton by his mother that Pte. Percy Pittam, of the O.B.L.I., has been killed in action. The intimation so far received has not been official, but it has been received from so many different sources that we are afraid its authenticity can scarcely be doubted.
The circumstances of the manner in which the news has been conveyed recalls the incident of September last, when two of Pte. Pittam’s comrades wrote home testifying to the fact that they had seen him killed, although a few days later the man in question himself wrote home from hospital, where he was recovering from shrapnel wounds. The fact that he was picked up unconscious explained his comrades’ mistake.
One of the comrades above referred to was Pte. Arthur Geden, of Manchester-terrace, who, curiously enough, was also the first to write home on this second occasion. He sates that he was with his regiment, going up to the line by night when the enemy commenced “flinging” shells about in all directions. The writer was standing about twenty yards away from Pte. Pittam when a large shell burst close to the latter killing him instantly. Had he been a little quicker he would have been himself on the spot where the shell exploded.
The letter was received by Pte. Pittam’s mother in a letter which she received from her son’s officer, who wrote: “I am sorry to have to write and tell you that your son, Pte. P. Pittam, has been killed in action. He joined us again only a few days ago and was a member of a carrying party ... He was buried quietly, when the night was still, and no guns firing, by our chaplain ... Your son was a brave fellow, and as such he must have died.”
The following letter subsequently received from his Sergeant, contained more particulars: “As an old friend of your son, Percy, I feel I should like to express my sympathy for you. Percy and I first met at Camberley in Sept. 1914, and we stuck together while he was alive. He was killed on the night of the 19th inst., and I assure you we all miss him very much. Percy suffered no pain; his death was instantaneous, and I do not believe there was a mark or wound on him; he died through concussion, as a very large high-explosive shell burst close to him. He was buried by the side of two more men who were killed the same night.”
We understand that Wendlebury and Weston-on-the-Green men have also written home conveying the same information.
Pte. Pittam was one of those who responded immediately the call for men was made, joining the Oxfords in the September of 1914, he had been at the front for a considerable period. He had been wounded, and had been home only a few weeks previous to his death, returning to his duties on Jan. 18, 1917. He was very well known in Bicester, and to few better than the members of the late Y.M.C.A. band, of which he was an enthusiastic member. He was 27 years of age." Bicester Herald 02/03/1917