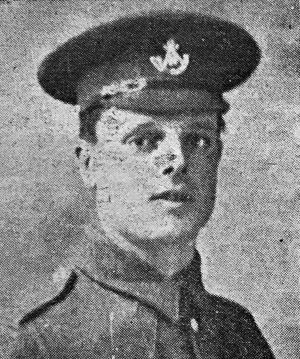 "News has been received from Corporal A.C. Coombs, formerly of Hardwick, stating that Lance-Corporal Percy Payne (10971) D. Company, 5th Batt. Oxford and Bucks Light Infantry had been killed in action during the great advance on September 25th. Corporal Coombs is a stretcher bearer in the 5th Batt. and knew his deceased comrade well. In his letter he says Payne was shot in the head and died a hero's death. The writer of the letter assisted to carry him out of the trenches and attended the funeral. Lance-Corporal Payne, the Corporal says, was much liked by all his comrades and will be sadly missed by them. They tender their sympathy to the sorrowing family.
Lance-Corporal Payne joined the 3rd Battalion of his Regiment on the 29th of August 1914, and proceeded on active service in May. He would have reached the age of 21 next month. He was employed on a farm at Witney, Great Hampton, when he responded to the call of his King and country. His mother now resides at Wendlebury. Deceased was the grandson of Mrs Pratt, of Redmore, Bicester." Bicester Advertiser 15/10/1915