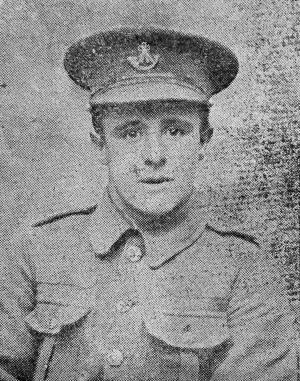 "From a letter received by Mrs Pitts, of Wales-cottages, from Gunner Jack King, of the Oxfordshire Heavy Battery, it appears that Driver Sidney Massey, son of Mr Thomas Massey, of North-street, has been killed recently. Dr. Massey, who was about 21 years of age, was with the O.B.L.I. while encamped at Bicester. He later transferred to the Engineers, and quite recently, in order that he might be among friends, transferred to the heavy battery, where he met his untimely end." Bicester Herald 22/09/1916

"The following letters received by Mrs Massey, of North-street, Bicester, pay a very high tribute to the soldierly qualities of her son, Pioneer Sidney Massey, of the Engineers, a report of whose death appeared in our last issue. We last week stated that he had transferred from the Engineers to the R.G.A., but we are now informed that this is not the case.
Wheeler Arthur Blowfield, R.G.A., of Bicester, in forwarding the bad news, writes on Sept. 15th: “I am more than sorry; no one out here will miss him more than I shall, as he was only two minutes’ walk from our lines. He came out to see me last night and gave me the Bicester Herald, and sat down in the hut. We had a “fag” together, and he was so very cheerful, said he was looking forward to coming home to Bicester again. His mate that told me the bad news said he was the most cheerful man in the whole camp. He was a fine soldier, and a son to be proud of.”
Another comrade said: “It happened on the night of the 14th – 15th inst, on the occasion of the last great success. He did not suffer any pain whatsoever, in fact, it was so sudden that even his sergeant, who was standing by him, was surprised, himself escaping without a scratch. Sid was liked for his cheerful disposition, and everybody mourns his sad loss. After the attack we had him buried in a cemetery not far from the place of action.”
His officer wrote: “It is my painful duty to inform you of the death of your son, Pioneer S. Massey, which occurred on the morning of the 14th inst. He was a good, intelligent, and conscientious soldier. You will, I am sure, be glad to hear that his body was recovered and buried, and the position of the grave will be made known to you shortly.”" Bicester Herald 29/09/1916