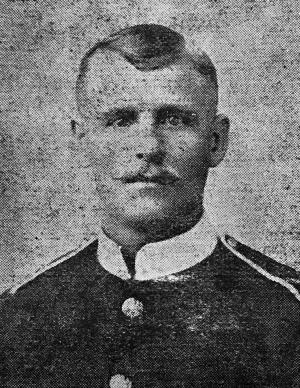 "Yesterday (Thursday), Mrs J. Smith, of 2, Victoria Road, Bicester, received a communication from the Record Office, Warwick, stating that as “no further news having been received relative to Pte. E. Golder, O.B.L.I., who has been missing since October 31, 1914, the Army Council conclude that he is dead, and died on October 31, 1914, or since.
This definite news, comes after many weary months of anxious waiting on the part of Private Golder’s relatives and friends. In the “Bicester Herald” of February 5, 1915 (just a year ago), the following appeared: – “The fortunes of Private Edgar Golder, of Bicester (O. & B.L.I.), as far as official information is concerned, are enveloped in mystery. Numerous letters written to Pte. Golder by his mother, Mrs Jane Smith, of Victoria-road, Bicester, have been returned, bearing the word “hospital,” and yesterday morning a letter was returned by the letter section of the London Postal Service, bearing the information that he was dead, and therefore the letter had not been delivered to him. This returned letter had been posted from the Bicester office on November 14th.
It will be remembered that a short time ago Mrs Smith received a communication from a Sergeant, stating that her son had been badly wounded in the head, but enquiries at the War Office, as to his whereabouts, have failed to throw any light on the matter. The War Office have, however, written saying that Private E. Golder’s name had not appeared in any list of casualties received, but enquiries were being made, and the result would be communicated as soon as possible. Subsequently the unfortunate soldier was reported missing. The utmost sympathy is felt with his relatives." Bicester Herald 04/02/1916