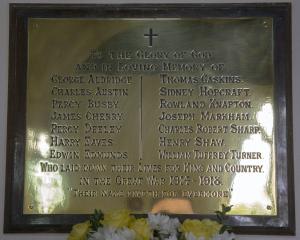 "Mrs T. Austin, of Wretchwick, has now received official intimation from the War Office that her son, Pte. Charles Austin, of the Royal Warwicks, who was reported missing on August 27th last, is now presumed dead. He was at the time of joining the colours in the employ of the late Mr T. Pankhurst as a farm carter, and in such employ was greatly respected.
Private C. Austin won for himself great esteem from all with whom he was associated by his constant genial disposition. His Commanding Officer, in reply to enquiries at the time he was missing, referred to Private C. Austin as a “brave and gallant soldier, worthy of the tradition of an Englishman, and whose loss to the Regiment would be deeply regretted.”" Bicester Advertiser 21/06/1918