The Meeting was held at St Edburg’s Parish Church, Bicester. Fifty seven members and eleven guests were present at the meeting. Bob Hessian introduced the speaker, David Buxton, who had recently helped to compile a history of the Church with co-authors Gill King and Matthew Hathaway. (St Edburg’s Church, Bicester – A History) 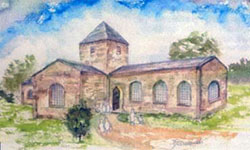 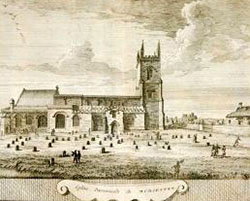 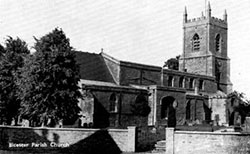 It is believed that the original wooden church was founded on the present site in the mid C7th after St Birinus had converted Cynegils, King of the West Saxons, to Christianity. The Church was designated a ‘Minster’ and became a mission centre for the surrounding area. It is unclear when the timber structure was replaced by a stone building but the triangular headed arch on the north side of the Nave is believed to have been the entrance to the Saxon Church. The Church was dedicated to St Edburg, a Saxon saint born near Aylesbury. She died around 650 AD. St Edburg’s Day is celebrated on the 18th July.

Gilbert Bassett, the Norman Lord of the Manor, decided to replace the Saxon Church in the early C12th. The Church was later extended to include a chancel and transepts and a central tower was built which was later demolished. Bicester Priory was founded in 1183 and became an important destination for pilgrims until it was demolished in 1537 at the dissolution of the monasteries. The shrine of St Edburg was removed to Stanton Harcourt where it can be found at present. A number of decorative relics from Bicester Priory were incorporated into the Church following its demolition. A new bell tower was added at the west end of the church in the early C15th. 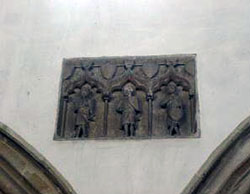 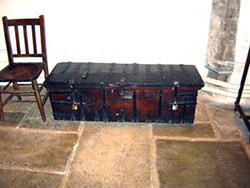 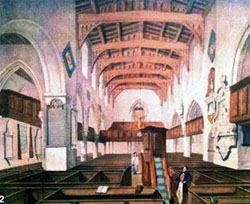 The Parish Chest dates from 1630. Box pews and galleries were installed in the interior of the Church in the C17th. A great storm caused considerable damage to the Church in 1765 destroying much of the medieval glass. A Victorian refit took place in 1862 which included the installation of pews and a gas heating and lighting system. The font was moved to its present location during the refit.

David continued his talk by describing the origin of the stained glass windows that form part of the fabric of the Church. Mention was made of the memorials that adorn the walls including those dedicated to the Turner and Coker families. Former vicars were remembered for the contribution that they had made to the parish during past generations. 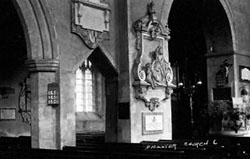 Bob thanked the speaker for an informative talk and for St Edburg’s Church hosting meeting. David answered questions from the audience. Members of the Society were then offered the opportunity to view a selection of the Church treasures that were on display, including the silver plate, vestments and photographic portraits of former incumbents. The meeting closed at 9:24 pm.