Bob introduced the speaker, Dr Martin Barnes, whose engineering background had given him an interest in railway history. The Meeting took place at The Pop-In Centre, Crown Walk, Bicester. Over thirty members attended the Meeting.

Before the coming of the railway in 1840, Oxford was a small city with a population of about nine thousand people. The transport infra-structure was slow, dangerous and expensive. Commodities were only transported through necessity e.g.: salt for preservative purposes. Most goods were produced or grown locally. Wood was a major resource; iron had to be transported to the area and was expensive. Drovers’ roads ran through the County for the movement of sheep, cattle etc. It took 2500 animals to supply London’s meat requirements per day! The fastest form of transport was the galloping horse. Pack horses moved at two miles an hour and could carry only half a ton. Roads were in a poor state until the turnpike was introduced. The first such road across the County was the Stokenchurch to Enstone road which provided part of the main route from London to Worcester. Stage coaches were expensive and slow. The distribution of market towns was spread evenly throughout the county. No where was more than six miles from its local market town, a day’s return journey for those using the facility. There was a shortage of wood by the C18th as a result of woodlands being plundered during the Civil War. The opening of the Oxford Canal was significant as it brought a coal supply to the area from the Warwickshire coalfields.

The first railway in Oxfordshire was The Great Western line linking London and Bristol in June 1840 and built by Brunel. Steventon, near Didcot, was the centre point and a Boardroom was built there to enable the Railway Board from London and Bristol to meet there. Steventon was the closest station to Oxford and six coaches an hour took passengers from the city to the station.

An Act of Parliament was required to build a line from Oxford to Didcot. This was hotly debated as the Duke of Wellington observed ‘It enabled the lower orders to move about!’ The first station in Oxford opened in June 1844 at Grandpont to the south of the river. The present station was built following the construction of the line to Banbury. The growth of the railways brought about the standardisation of time throughout the country. Local time was changed to reflect the need for railway timetables to be consistent and these were based on London time. A second terminus was constructed at Rewley Road in October 1850, at the site of The Said Business School, to serve the new LNER line to Bletchley which went through Bicester. Lord Verney (Claydon House) did much to finance this project. One of the first trains to use Oxford Station took passengers to ‘The Great Exhibition’ in two hours. Small branch lines were constructed to link mainlines with a network of small local communities. The more direct Chiltern line from Birmingham to London was built later. Between 1860 -1870 over five hundred miles of line was constructed each year. 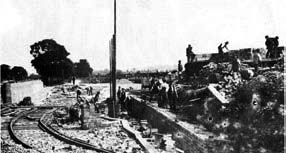 The coming of the railway ensured a large range of new goods was available to the population and an efficient transport system linked the country. Thus some significant changes included:

Railway development facilitated the growth of manufacturing industries. The changes had a huge impact on social and economic life in the area. They speeded up travel and people could go on holiday for the first time.

The railway system changed much over the years with innovation, contraction and expansion. The last slip carriage was activated at Bicester.

Martin concluded his talk by answering questions. The Meeting closed at 9:38 pm.