The Meeting was held at St Edburg’s Church Hall, Bicester. Thirty nine members and guests attended the Meeting. Bob introduced the speaker, Bill King, who declared a long interest in the subject dating from his R.A.F. days.

The first powered flight had taken place in 1903 and the English Channel crossed in 1910. The Royal Flying Corps formed in 1911 with eleven planes and 16 pilots to be followed by The Royal Naval Air Service with 14 planes.

World War I opened with The Royal Flying Corps having two hundred and fifty planes. By the end of the conflict the newly formed Royal Air Force had increased in strength to twenty five thousand machines. The service suffered severe cut backs after the war and there was little development for many years. Alan Cobham’s Flying Circus gave many civilians their first taste of flying. 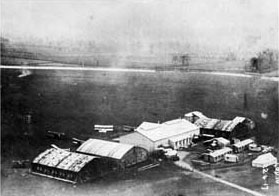 The rise of Nazi Germany in the early 1930s saw a need for aviation development. The subsequent expansion of the R.A.F. saw many local bases refurbished or constructed such as at Bicester, Upper Heyford, Abingdon, Harwell and Brize Norton. Fighter planes, such as the Hurricane in 1935 and the Spitfire in 1936 were developed. Bomber Command was equipped with a light bomber force such as Blenheims. A large programme of airfield construction took place prior to the conflict and continued throughout the War. Larger planes needed bigger airfields and increased crew numbers. Heavy losses in the early war years saw a need for training large numbers of replacement crews and many of the local airfields around Bicester were designated as Operational Training Units.

Many World War II airfields still exist today but with the passing of time they have been neglected and have fallen into disrepair. Buildings such as Control Towers are derelict or have been converted to industrial/storage use. Private Flying Clubs sometimes use the facilities and maintain the tradition of flying from them. It is of concern that this whole chapter of our history is being allowed to disappear without at least the preservation of representative sites.

The Meeting concluded at 8:57 pm, following a question session.