Drovers' Roads in Oxfordshire & Beyond

Tim Healy’s excellent talk in November made us all eager to go in search of an old drovers’ road. 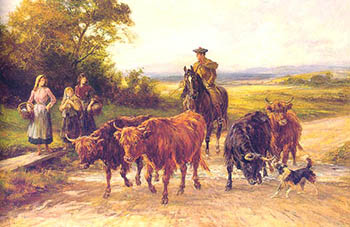 These roads, also called green lanes (and sometimes green tunnels), were a cat’s cradle of routes drovers used to move livestock on epic trails across the country. Tim alerted us to some telltale signs of these ancient routes that we might come across. First, an inn situated at a lonely spot (drovers avoided villages and towns in fear of their livestock being rustled or contaminated). Second, a ‘drovers’ marker’ – an unexpected group of Scots pine trees planted by the drovers on ridgeways (Scots pines grow fast). 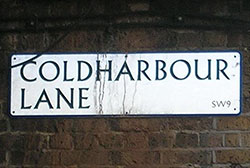 Third, a name such as ‘Coldharbour’ given to roads or buildings, usually situated outside towns. ‘Coldharbour’ was the name of a resting point or shelter for drovers – and as the name suggests, no refreshments or comfort offered! Fourth, unusual pub names (e.g. the Welsh Pony in Oxford) – drovers rode ponies to herd their livestock. And fifth, roads with very wide green verges, seemingly for no apparent reason.

In Elizabethean times, because of the great fear of vagabonds and vagrants, laws were passed stipulating that drovers had to apply for special licences, which could only be claimed by men over the age of 30, who owned their own home. Drovers became heroic figures, travelling through wind and rain, and sleeping with their animals under the stars. They were hired on contract by farmers to move livestock from the farms to the large markets of London (Smithfield) and other key trading locations. Tim told us that in the hey day of drovers (1700-1850) as many as 30,000 cattle per year were moved from the Welsh counties of Camarthenshire, Pembrokeshire and Cardiganshire to London, and other locations in the south. A lot of the routes to London conversed on Barnet, where huge livestock fairs were held. The main objective of these Welsh drovers would be to safely transport their cattle from Wales to Barnet, paying as few tolls as they could, avoiding towns and villages, and loosing as few cattle as possible. 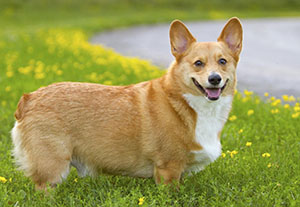 Working six days a week (not Sundays), drovers would cover an average of twelve miles a day, and a large herd of cattle could span over half a mile in length, requiring a dozen or so drovers on horseback to steer them on their way. Drovers would also use dogs (the Welsh drovers used corgis). To withstand these long journeys, the cattle were shod. We learned that the cattle from Wales were very thin and the long journey was used to fatten them up en route, before reaching their final destination. The wide green verges of the drovers roads enabled the livestock to graze during the day and during the night, and smaller drove roads would lead from the main route down to watering places for the livestock in valleys.

The demise of drovers (around 1850) was largely due to the introduction of the railways, which became the main mode of transport for livestock. Today, drovers and their way of life still conjure up rather heroic and romantic images, respected for their independence and skill in transporting vast numbers of livestock all over the country.