The Meeting was held at The Pop-In Centre, Crown Walk, Bicester. Present were 31 members and 3 visitors. Bob introduced the speaker who had worked for many years at Sulgrave Manor. 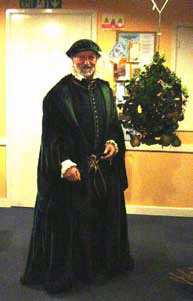 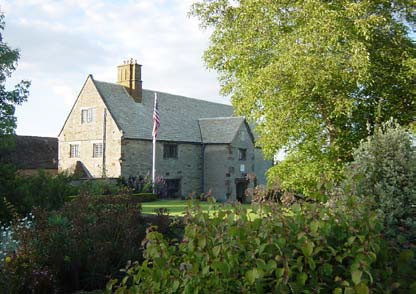 Lawrence Washington purchased the Sulgrave Estate, over 3 500 acres, from the Crown at the time of dissolution of the monasteries in 1539 for a sum of £324 – 14s – 10d. He built the house for his second wife Amy and they subsequently had eleven children.

The festival of Yuletide was greeted by ‘Wassail! Wassail!’ (Good Health!). It was also the name of a drink prepared in a large bowl made from lignum vitea (The tree of life). It was claimed that the drink had magical properties and cured illnesses. Made from apples and pears, it resembled a mild cider with herbs and spices added. A hot iron was used to mull the drink.

The festival originally took place in mid winter and commenced on 21st December, the Winter Solstice. It was to celebrate the return of the sun, the Roman Saturnalia or as in Northern Europe, Yule, the god of the circuit of the sun. The fires were kept burning to encourage the return of summer. Normal social roles were reversed with a change of the master and servant relationship.

The Halls were decorated with evergreen holly and ivy, a pagan custom. Evil spirits were welcomed but burnt on Twelfth Night.

It wasn’t until 336 AD that Christianity had an influence on the festival. Christian and pagan elements were brought together by Pope Julius I who combined oral accounts brought back by missionaries sent to convert the northern heathens to Christianity. Some two hundred years later the 25th December became the first day of Christmas and the twelve days followed.

Symbols of the festival became relevant such as the holly and the ivy. The yule log was cut down prior to the festival and kept burning for twelve days. The embers of the fire were used to light the fire the following year. The ash faggot, gathered from a year’s growth of hedgerow, had nine ties to indicate the order of marriage for local maidens. Mince pies were shredded muffins and twelve pies were eaten on visits to ensure a peaceful year for the family. The holly was bound with ivy in the outer ring of a hanging decoration to represent men with an inner ring to represent women. Fruit represented children and spices and mistletoe regeneration.

Cathedrals and churches would appoint a boy bishop for twelve days. The Lord of Misrule was a practical joker responsible for organising entertainments.

Advent Sunday, before Christmas, marked the time when no meat would be eaten until Christmas. Gifts were exchanged at Midnight Mass at Christmas. The Twelfth Night saw the biggest feast. A variety of games would be played. Mummers Plays were handed down from generation to generation. Good defeats evil. By Tudor times additional words were being added as more people could read. The original black costumes were replaced by more colourful clothes. At midnight three pies were displayed filled with birds, snakes or toads and a dwarf with a tickling stick.

Oliver Cromwell stopped many Christmas traditions but they were reinstated by Charles II. Christmas cakes, presents and music (Carols) were introduced from France. In later times the Georgians burnt blue and white candles and poor boxes were introduced on Boxing Day. The Christmas tree came from Germany in Victorian times.