The Meeting was held at The Clifton Centre, Bicester. Seventy four members and three guests were present at the meeting. Pete Chivers introduced the speaker, Michael Ocock, who provided an insight into the village and the personalities and events that had shaped its history. 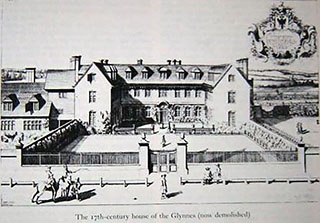 Michael indicated that when he moved to the village in 2001, there appeared to be lack of information concerning the history of the settlement. Although there were no pamphlets available, a number of books had been published that outlined the heritage of the community. Most recently David Green had published a volume entitled ‘In the Wake of Ambrosius’. Possibly the first village history published in England was written by William White Kennett, Vicar of Ambrosden from 1685 to 1701. His ‘Parochial Antiquities’ was published in 1695. Two other books are worthy of mention, namely those written by John Dunkin and John Henry Parker.

The name Ambrosden is derived from the Old English name indicating an ancient settlement built on a low level hill. Iron Age pottery and Roman coins have been discovered in the village. The prefix of the village name is thought to have originated from ‘Ambre’s Hill’ or ‘Hill of the buntings’.

The nine hundredth anniversary of the Church was celebrated in 2006. Muswell Hill had a chapel established on it as early as 1106, built by Ralph the Hermit and financed by Joan Piddington. The present church at Ambrosden was built in the C12th and C14th with a tower and Norman doorway. Pargetting was added to the tower in C16th as a demonstration of loyalty to Queen Elizabeth I. The Vicarage, built in 1638, has possibility the oldest Cedar of Lebanon trees in the country planted from seeds brought by Edward Pococke from Syria in 1636.

Ambrosden had two major mansions built in the village at various periods. The first was built by Sir William Glynne using materials reclaimed from the demolition of Bicester Priory. The second mansion was built in C18th by Sir Edward Turner. This was not as grand as the original. Sir Edward Turner made a fortune as a result of ‘The South Sea Bubble’ affair. His son built the house. The architect was Sanderson Miller, a gentleman architect and landscape gardener. A series of tunnels, now buried, are the only evidence of the house remaining. The construction of the mansion made it necessary to alter the alignment of the local road system. The ‘Ambrosden Straight’ was constructed during this period.

World War II brought significant changes to the village with the construction of the Ordnance Depot. Railway crossing gates still exist that linked the Arncott and Graven Hill sites. There were 41 miles of track contained in the Depot. Some 24 000 troops were stationed at the nine sites by 1944. A Romney Hut, situated near the garage, was once a cinema. Army housing was built from 1948.

Michael answered questions from the audience. The Meeting closed at 9.16 p.m.