The Meeting was held at The Pop-In Centre, Crown Walk, Bicester. Thirty five members and guests attended the Meeting. Bob introduced the Speaker, local historian, Martin Greenwood, who had recently published a new book relating to ‘The Villages of Banburyshire’.

Martin defined the limits of ‘Banburyshire’ as a unique area bounded by the Edgehill escarpment, and extending to Hook Norton, Deddington and Brackley. It therefore encompassed an area within a ten mile radius of Banbury.

Banbury served as a ‘County Town’ with links to some one hundred and forty local villages. Many country characters lived within the borders over the centuries. There are a variety of unique villages, particularly nearer to Bicester and including Lower Heyford, a communications hub with canal, turnpike roads and the railway; Fritwell, a stronghold for The Levellers and The Sibfords, a centre for the non conformist faiths. 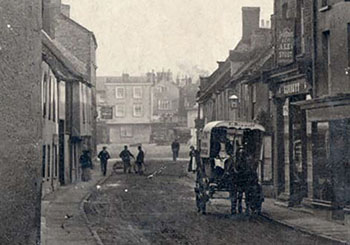 Carriers were particularly important to the transport network and a symbol of local prosperity. In the 1860’s they would crowd into Thursday Market Day at Banbury. Local families were particularly associated with the service e.g. The Bourtons of Bicester who were based in Sheep Street and Market Square at times between 1870 and 1930. The journey to Banbury would take approximately three hours. Local Inns served as collection and distribution points for the trade e.g. The Waggon & Horses in Sibford Gower. The Market Square in Banbury was often congested with carriages, carts, wagons and coaches. Hiring Fairs, such as at Michaelmas, were particularly busy. These were accompanied by Fairs and other attractions. Local pubs and food stalls were very profitable at these periods. Most Carriers held allegiance to particular communities and carried local products for clothiers, lace makers etc. They not only transported goods to market but were employed to pay bills and carry people. The Carriers often had a variety of additional occupations. Local Inns, such as The George in Bicester, provided different standards of accommodation and facilities for drovers, regulars and the ‘upper classes’.

Hunting and agriculture were important facets of rural life in C18th and C19th. The population of Banbury showed a steady increase over this period whilst Bicester’s growth remained virtually static. Village populations reached their peak between 1840 and 1870. Banburyshire had the highest rate of religious dissenter population in the country at this point, possibly due to the remoteness of the area.